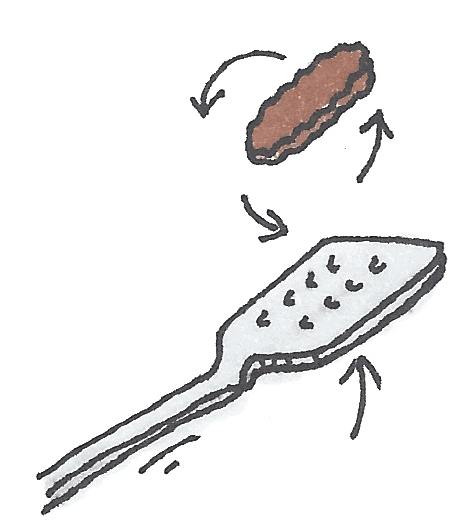 Slicing Pie is based on the unpaid portion of the fair market value of each person’s contribution. In a startup, time is one of the most common contributions from founders which means the first step in establishing a new partnership with a co-founder is to determine the person’s fair market salary. This is the amount that your business would pay if it could pay. Fair market salaries are important for two reasons. First, it gives the team the ability to track each person’s at-risk contribution (AKA “bets”) and second, it helps the team understand the fully-loaded costs of running the business. Under estimating costs is a common problem for startup teams leading them to overestimate profit projections. Remember, the Pie terminates when the company is able to pay for everything, including salaries. When the company can pay it will pay so it’s important to set salaries that are logical in the market.

Negotiating a fair market salary in a startup is pretty much the same process you would use when negotiating a job at an established company.

A person’s fair market salary is a function of their education, experience, and skills in relation to the requirements and responsibilities of the position. Consider Joe and Tom. Joe is a recent high school graduate and Tom has a PhD in Electrical Engineering and 15 years of experience as an automotive engineer.

Joe and Tom apply for jobs at McDonalds. They both accept entry-level jobs as flipping burgers, they are similarly qualified and, therefore, would have a similar fair market salary of around $10 per hour.

Joe and Tom apply for jobs at Tesla, Joe gets turned down, but Tom gets to design the next generation of vehicle battery and a salary of $200,000 per year plus bonus.

Clearly, Tom is financially better off at Tesla and shouldn’t take a job flipping burgers. If he wants to flip burgers, he must do so at the market rate.

When negotiating a salary, certain assumptions are made. In the McDonald’s example, the hiring manager assumed that both Joe and Tom were going to have similar productivity because neither of them has experience relevant to the job. In the Tesla example, the hiring manager assumed that Tom’s skills and experience would be much more valuable to the company and, because there are a lot more high school grads looking for jobs than PhDs, the supply is lower. Hence, a job and a high salary for Tom.

Any assumptions made in the hiring process will be tested over time when the employee’s performance is observed. For example, Joe may be able to flip 200 burgers and hour while Tom can only flip 100 burgers per hour. Or, Tom may spend half his time responding to customer service emails at Tesla.

In Slicing Pie, this begs the question: In a burger startup, Tom (the horrible flipper) will earn more slices in the Pie than Joe (the amazing flipper). In an electric car startup, Tom (the engineer) will be contributing slices when he responds to customer service emails that Joe could probably be doing.

This doesn’t sound fair, because it’s not fair. But, it’s not a Slicing Pie problem…it’s a management problem.

In both examples, the management team needs to take action to rectify the issue. Once the management issue is corrected, Slicing Pie will make the proper adjustments to maintain a fair split.

In the burger example the management issue is performance related for both guys. Each one is either performing at, below or above what was assumed when they took the job. If the hiring manager assumed that a burger flipper should flip 200 burgers per hour the manager needs to address Tom’s performance.

Tom’s manager should bring the problem to Tom’s attention and make it clear that productivity needs to increase in order to keep the job and he is getting his first warning. Specific goals need to be set and the manager needs to make sure Tom has the tools and training to do the job right. If Tom doesn’t have a spatula, for instance, his performance would be an issue through no fault of his own and his manager should make sure he gets one.

If, after Tom has everything he needs and is still not productive, his manager should issue a second warning and review the goals and reassess the situation. The job of the manager is to make sure that there are no externalities under his control that are preventing Tom from doing his job. Training? Check! Equipment? Check! Supplies? Check! Back to work, Tom!

If Tom has everything that Joe has and still can’t flip burgers maybe he is in the wrong job. He was given ample opportunity to correct his behavior and he had everything he needed, but he was still unable to perform at an acceptable level. It would be fair to fire him for non-performance.

In Slicing Pie, a person can be terminated after two warnings. This, among other things, is considered termination for cause and the individual would lose slices from non-cash contributions such as time. This automatic correction ensures the Pie stays fair for the remaining Grunts who are performing.

When Tom takes time to answer emails, he is not designing batteries. His work suffers. Again, his manager needs to address the issue:

Right away, the manager learns that customer service overflow is being sent to Tom. At $100 per hour, this cost is too high. Tom’s manager should consider hiring Joe to handle the overflow.

Slicing Pie provides and easy and logical way to add help where needed. It would be foolish to allocate slices in the Pie to Tom for doing low-value tasks. If Tom’s manager cut Tom’s salary for the time he spent on customer service emails Tom would either ignore the emails or quit the job. The only fiscally responsible decisions are to hire the right resources so each person can maximize personal productive or fire the unproductive employees and replace them with more competent workers.

In startups, founders often wear many hats and even take pride in being a Jack of all trades. Many work long hours doing everything. I, myself, fall victim to this hubris. But when you do this you wind up overpaying for work that could be delegated to a lower cost resource. With Slicing Pie, there is no reason to fall into this trap. Yes, adding more Grunts to the Pie means more shareholders, but the company will move faster and be more stable with the right team. No matter how many Grunts are in your herd, everyone will have the equity they deserve as long as the managers make good management decisions.