Once in a while, someone will ask me why the Slicing Pie model isn’t based on value creation instead of the fair market value of the contributions made. The concept sounds reasonable: shouldn’t a person who creates the value reap the value? However, there are a number of problems with this approach that make value creation an impractical tool for the fair allocation of equity.

Pretend a startup is a game of Blackjack. Two partners, Anson and Norvin, agree to play against the house and split the winnings 50/50. They each bet $1 on the same hand. The dealer deals two aces. The partners weren’t expecting this, but they decide to split the aces and double down. Anson is busted, so Norvin puts $2 more on the table. Now the 50/50 split doesn’t seem quite fair; Norvin bet $3 and Anson only bet $1. It would be logical to split the winnings 25/75 not 50/50.  In this analogy, risk is represented by the bets, and value creation is the winnings (if any). In a startup, the winnings are the future profits or proceeds of a sale, if any. 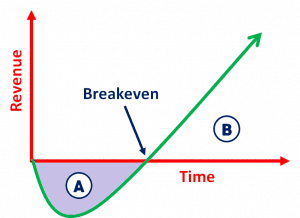 In the graph shown, the value created is represented in area B. Value comes in the form of income generated.

The shaded area A shows the losses incurred before breakeven. Area A represents risk taken by the individual participants necessary to realize the value created by the firm in Area B.

It’s important to remember that expenses include all costs related to the company, even those that are unpaid. For instance, many startup founders forgo salaries in the early days to conserve cash. This unpaid salary is at risk; it is a “bet” on the future outcome of the company.

In the Slicing Pie model, risk implies the unpaid portion of the fair market value of the contributions made by each participant. Risk, in this case, is a participant’s actual financial exposure, not the chance they will lose it. In other words, risk is the bet, not the odds of winning or losing. Unpaid compensation for contributions made is at-risk and can include both cash and non-cash investments.

Unlike future value, risk is quantifiable and knowable at any given time up to breakeven. In the Blackjack analogy, we can easily observe the bets made by each player, but it is impossible to predict the ultimate payout. By keeping a log of the various contributions made and who made them, the Slicing Pie formula can calculate one person’s risk relative to the others and, therefore, allocate equity fairly. At the point of breakeven, all the risk is known and a final percentage for each person can be determined. After the breakeven point, individuals are no longer incurring personal risk because they are getting paid their salaries and expenses, etc. In other words, they are no longer making out-of-pocket bets, they are, in essence, playing with the house’s money.

Now, let’s consider the same scenario from the standpoint of value creation. Anson and Norvin go to the Casino. They discuss, at length, which game to play. Anson wants to play Blackjack, but Norvin wants to play Craps. They finally decide to go with Blackjack. Anson argues that because it was his idea to play Blackjack, he should get a larger share of the winnings. Norvin reluctantly agrees to a 60/40 split and they each place $1 on the same hand. The dealer deals the two aces. Another discussion ensues about whether they should split the aces. Anson doesn’t want to because he is out of cash. Norvin offers to pay, but Anson insists the split should stay the same because it was his idea. Norvin thinks that his money will enable them to win more money. The dealer is getting impatient. They finally agree to a 50/50 split and Norvin bets. The dealer puts the next cards down. Anson makes the call on the left hand and loses, Norvin makes the call on the right hand and wins! Norvin is upset that he has to split the money 50/50. It was Anson’s idea to play, but Norvin thinks it was his money and strategy that created all the value. Anson is upset because he had to pay 100% interest to the loan shark that gave him the original $1 and Norvin didn’t have to take a loan. Anson thought that they should pay off his loan with the winnings. After all, thought Anson, without his $1 they wouldn’t have had enough to play, and it was his idea to play in the first place.

They each hire lawyers…

In this scenario, the duo tried to determine value creation before the value was created and, when value was actually created, they both felt entitled to a larger share. This is a common problem.

In most cases, however, it’s impossible to predict the value that will be created and, even if it were possible, it would be impossible to assign that value to individual participants. In the above example, where was the value created? Anson’s idea to play Blackjack? His loan? Norvin’s money? Norvin’s strategy? Or was it just luck? It was probably a mix of everything.

In the non-startup world everyone would just get paid. There would be no need to place personal bets because the company is playing with the house’s money or the investor’s money. In both cases, what you are getting paid should be equal to the fair market value of the contributions you make, not the future value generated from your contributions. Can you imagine having to argue how much value you created every pay period? Would you give money back if your ideas backfired?

In the non-startup world, we negotiate payments based on the market. People who have a track record of creating value have higher salaries than those who don’t. When a person is hired, it is expected that they will perform to the best of his or her abilities. People who perform better than expected get raises and bonuses and promotions. Those who perform worse than expected get fired.

Consider an individual who gets hired to pursue a marketing strategy that was designed by the management team. In the non-startup world, he would be paid his salary. In the startup world, he would not get paid and, therefore, would be betting his salary on the future. But, what if the strategy was flawed and did not work? It’s not the fault of the employee if he did his best to follow the strategy as outline. In both cases, the company might be forced to discontinue the operation and terminate the employee. It’s a bummer in either case, but does the failed strategy mean the bet the startup guy made on the startup with his unpaid salary doesn’t count?

Does the $1 Norvin bet on the losing left hand in Blackjack not count towards his total bet? Should Anson be penalized for making the wrong call?

What if the employee spots the flaw in the strategy and corrects it allowing the company to make millions? Does he get to keep the money that was made? Probably not! It belongs to the company. In the non-startup world his managers would promote him and give him a raise. In the startup world his managers would do the same, but because he placed a bet in the form of unpaid salary, he would be entitled to a future % share of the profits that properly reflected his % share of the risk taken to earn those profits.

In the Slicing Pie model compensation for all types of contributions is treated the same way it would be treated in a non-startup company. The only difference is that if the money isn’t available to pay everyone, unpaid money is at-risk and, therefore, becomes a bet on the company’s future. Once the bet is on the table, it’s part of the game.

Entrepreneurs are pre-occupied with future value, which is understandable. However, problems arise when their predictions are treated as facts. The only thing they can know for sure is the fair market value of contributions made. By looking at risk taken, rather than value created, founders can operate their companies in a more logical way and avoid arguing about which past moves created future value.