Like many entrepreneurs, Isaiah McPeak had some bad experiences with fixed splits early in his career. “In one company, there were five equal partners, one of them did basically nothing which was very frustrating for the rest of us, we eventually folded,” he remembers. “In another, we wound up in a fight and had to buy out one of our partners which we thought was unfair. I didn’t want to make that mistake again and I was happy to find Slicing Pie after searching the Internet for fair equity split models.”

It took a little convincing, but Isiah was able to get his early co-founders on board to use Slicing Pie and found it to be an invaluable tool for the launch of statUP in May of 2015. “We were able to bring in a CTO and some early employees before we had cash,” he explained, “without Slicing Pie we would not have been able to do that. We were also able to secure some important consultants who worked for slices instead of cash.” Along the way, the company added new employees and parted ways with others, “Slicing Pie helped us split amicably with employees who left the company,” he added.

“We used the recommended settings in Slicing Pie, but there were still a few issues,” Isaiah noted, “first, one of our early investors had a lawyer who didn’t understand the model. It was hard to work through, but it was well worth the effort and I’d do it again. Second, we struggled with allocating the right finder’s fee when an investor made multiple rounds of investment. We should have worked out how it would be paid ahead of time. Lastly, the team had different levels of detail when tracking time so we had to make a few adjustments at the end, but it worked out fine.”

The team used Slicing Pie during the critical bootstrapping phase of statUP and were able to terminate the Pie when they raised a seed round of funding in December of 2016. Isaiah said his experience was very positive, “we couldn’t have gotten where we are without Slicing Pie. We are grateful for the concept. Even though, ironically, once understood it sounds more ‘normal’ than alternatives!”

statUP is a skill tracking app for youth sports. Starting with soccer, we help athletes earn stats that matter to coaches. Athletes take tests, earn stats, and level up their skills. For more information visit, statUP.com. 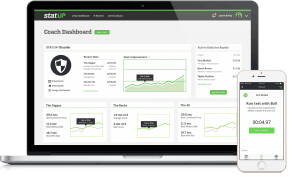